SEATTLE, June 26, 2017 /PRNewswire/ -- Alaska Airlines is chasing "The Great American Eclipse" on August 21, with a special charter flight for select astronomy enthusiasts and eclipse chasers to experience totality from 35,000+ feet above the earth. 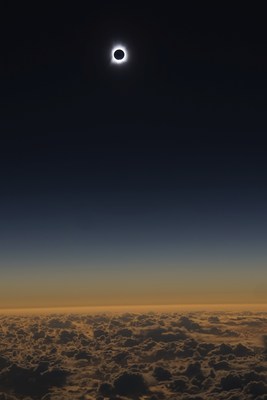 The flight will depart Portland at 7:30 a.m. PDT and fly off the coast of Oregon, allowing guests on board to be among the first of millions to witness this phenomenon. The invitation-only flight is not commercially bookable, but Alaska Airlines is giving one lucky fan and a guest a chance to win a seat on the flight. The contest begins July 21 on Alaska Airlines' social media channels.

Weather is the largest variable when it comes to eclipse-viewing, and the Pacific Northwest is more prone to inclement weather and overcast skies than other parts of the country. However, Alaska Airlines is making sure eclipse chasers on the West Coast have prime viewing conditions, above much of any potential weather or cloud cover.

"As an airline, we are in a unique position to provide a one-of-a-kind experience for astronomy enthusiasts," said Sangita Woerner, Alaska's vice president of marketing "Flying high above the Pacific Ocean will not only provide one of the first views, but also one of the best."

"The Great American Eclipse" is the first coast-to-coast total solar eclipse in United States history since 1918. It will be viewable first from above the Pacific Ocean, before appearing in Oregon and following a diagonal path across the country to South Carolina.

While the eclipse will be visible from all over North America, totality will only be visible from specific locations across the United States. For enthusiasts looking to chase the eclipse elsewhere, the total solar eclipse is viewable within driving distance from the following Alaska Airlines destinations: Redmond/Bend, Oregon; Sun Valley, Idaho; Charleston; Nashville; St. Louis; Atlanta and Kansas City, Missouri. Flights to the prime Pacific Northwest viewing destinations of Redmond and Sun Valley are already filling up for the week of the eclipse.

At the request of eclipse-chasers in 2016, Alaska Airlines adjusted its flight path to optimize viewing of a total solar eclipse over the Pacific Ocean. With the previous eclipse, passengers aboard the flight from Anchorage to Honolulu were some of the last in the world to witness the total solar eclipse. In August, Alaska Airlines guests aboard the charter flight will be among the first to observe "The Great American Eclipse."

Alaska Airlines, together with Virgin America and its regional partners, flies 40 million guests a year to 118 destinations with an average of 1,200 daily flights across the United States and to Mexico, Canada, Costa Rica and Cuba. With Alaska and Alaska Global Partners, guests can earn and redeem miles on flights to more than 900 destinations worldwide. Alaska Airlines ranked "Highest in Customer Satisfaction Among Traditional Carriers in North America" in the J.D. Power North America Satisfaction Study for 10 consecutive years from 2008 to 2017. Alaska Mileage Plan ranked "Highest in Customer Satisfaction with Airline Loyalty Rewards Programs" in the J.D. Power 2016 Airline Loyalty/Rewards Program Satisfaction Report for the last three consecutive years. Learn more about Alaska's award-winning service and unmatched reliability at newsroom.alaskaair.com and blog.alaskaair.com. Alaska Airlines, Virgin America and Horizon Air are subsidiaries of Alaska Air Group (NYSE: ALK).